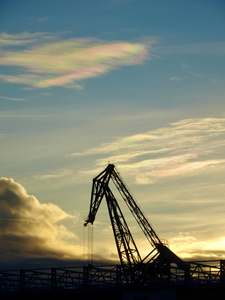 After a cloudy period that seemed like forever, finally a clear and sunny day! After coming from the store, I noticed clouds of color in the dock area of Hietalahti. I don't know about the time duration, as I couldn't follow. However - a new observation after a long time!