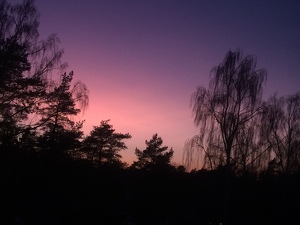 As the sun set, pearl clouds began to stand out in the sky. I expected a few of them because the same was in the sky in the morning as well.

The pearls of the evening rusk were pale, long soft waves. As the evening darkened, a powerful purple light came into the sky, reminiscent in color of the ancient Pinatuboruskus. Admittedly, now the purple color was clearly smaller in scale than in the browns of the 1990s. However, I wonder if these could be similar particles - the norm in addition to the pearlescent?