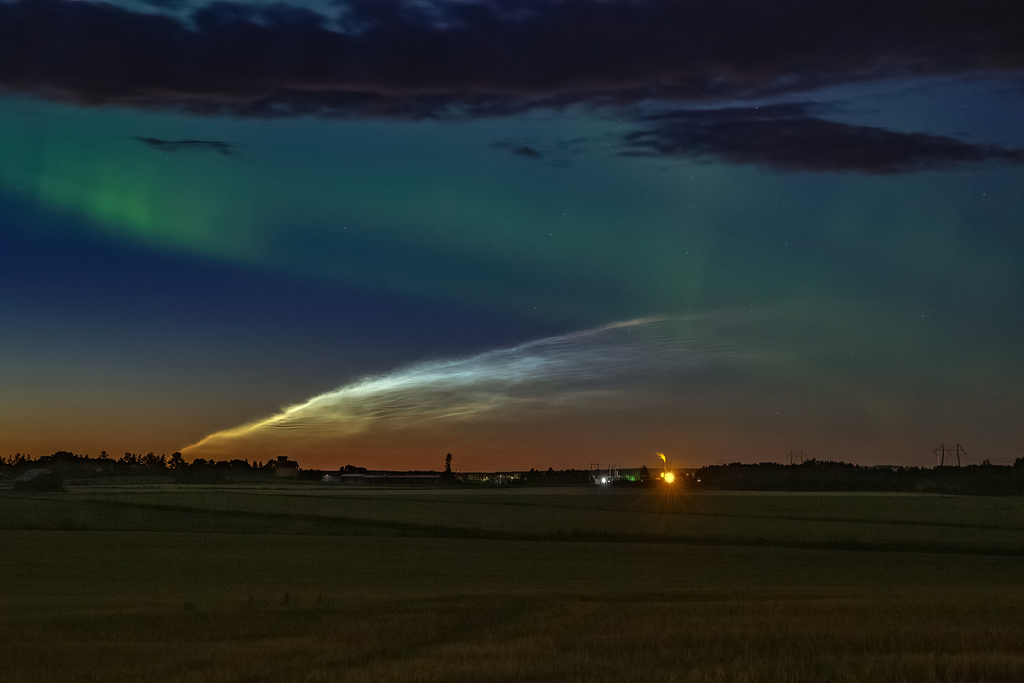 8.8. After the summer break, the first northern lights were seen on the night between Sunday and Monday. There are 25 observations so far. At the same time noctilucent clouds were also visible, although the cloud area was so llimited that some of the observers referred to them in singular. Attached is Pirjo Koski's picture of the view in Laitila at 1.30 am.

ISS passed across the Moon

6.8. In Ulvila, Vesa Puistovaara tried to photograph the Moon transit of the International Space Station on Thursday. The narrow field of view of the equipment did not allow for mistakes, but everything went according to plan when at 16:20 the ISS passed across the image field. The event was over quickly: Puistovaara says the transit lasted about 0.2 seconds. "The appearance of the object is not first-class, mostly pixelated, but I think I succeeded quite well," he says. 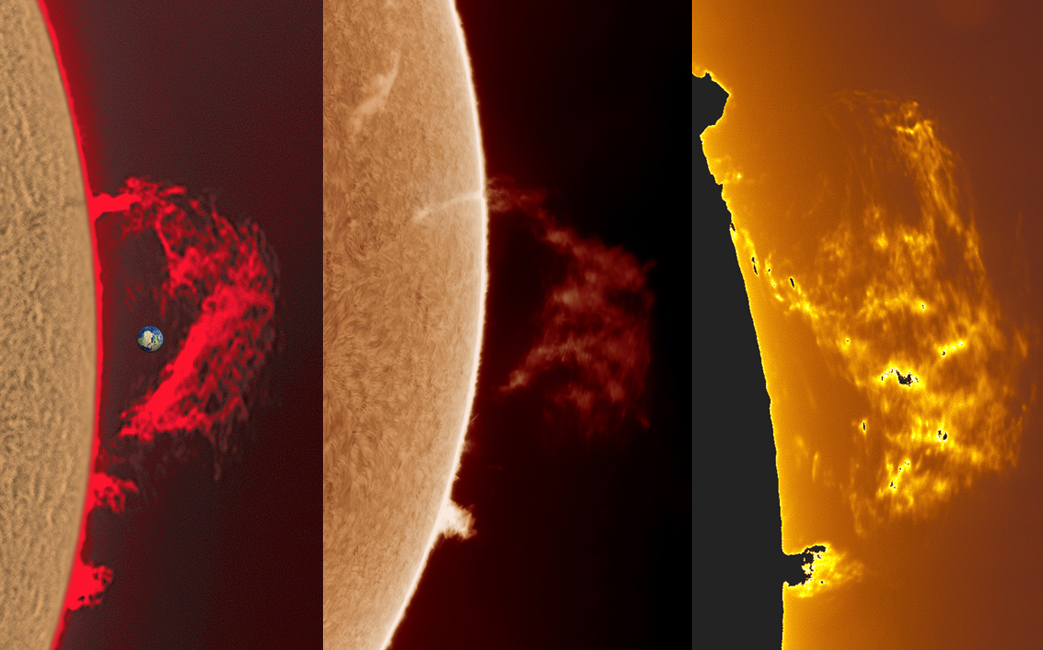 Three views of the Sun on Thursday

5.8 A humdinger of a protuberance got observers pointing their telescopes towards the Sun on Thursday. "A such a memorable sight on the surface of our nearby star", writes Petrus Kurppa, who took the middle photo. On the left is a shot by Tapio Lahtinen and on the right by Santeri Peltola. Kurppa states that as the solar maximum approaches, eruptions of this class will be seen relatively often.

Solar observations at the beginning of August » 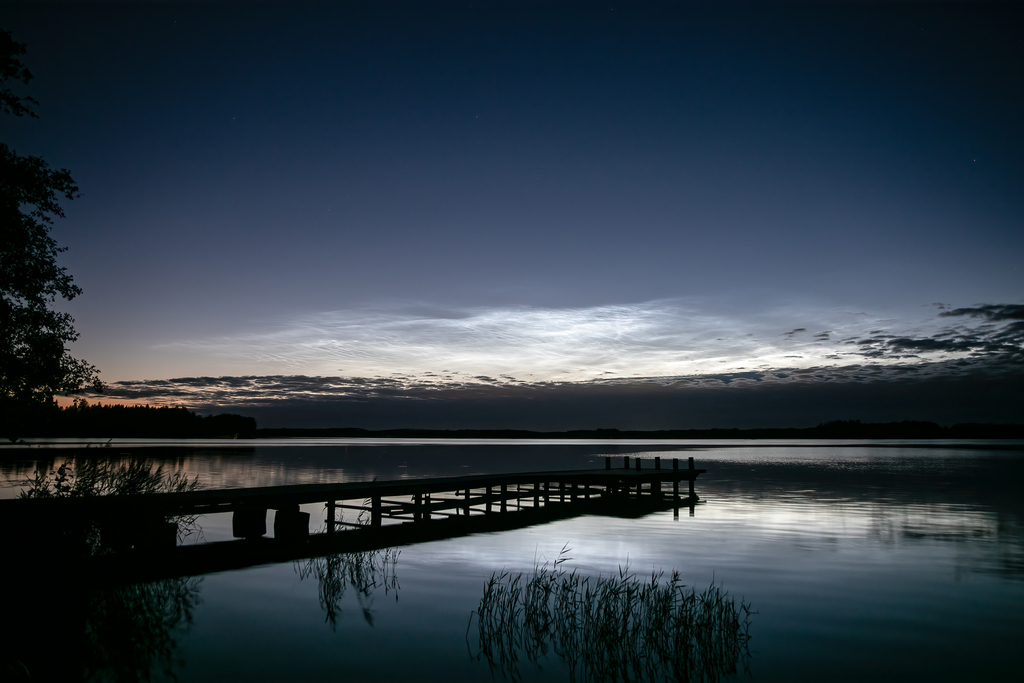 4.8. The good rate of NLCs in June continued into July as well. Sightings came from 26 nights, which is two more than the previous record from last year. August has started with nightly observations, so 2022 may well in the end be the quantitatively best summer so far. Shown is a photo by Markku Ruonala from the night of July 30. 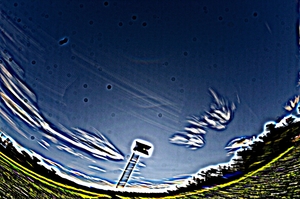 Kind of lucky. In Illansuu, during a routine check, I noticed a weak zyk in a fairly cloudless sky. I set the camera to shooting readiness, but I had to realize that the zykki had already gone. However, just for fun, I put a stack of 120 photos on fire. My expectations were zero, but I still checked what was being filmed. At first nothing, but then very sharp halos drawn by a passing cloud. In the end, 77 pictures ended up in the pile. Parry was hiding there. In a timelapse made from a stack of images, you can sort of distinguish halos in the sky. Figure 1. Stack of 77 images at 17:56-18:09 (3... 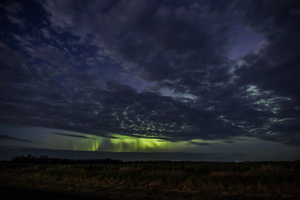 Observation began at 11:00 p.m. Central Daylight Time, with low diffuse aurora arc.  Many clouds made it difficult to see.  Breakup started about 12:18 and it danced for about 15 minutes.  Shortly after that approximately 12:40, there appeared to be an invisible SAR at the equator side of the main aurora in recovery phase.  At 1:06 a STEVE appeared visible in the SAR.  There was a hazy green band below the STEVE and I couldn't identify any pickets.  Green pulses from the main aurora bumped up against the STEVE and interacted with the green band below it.  By 1:16 the STEVE was extremely faint,... 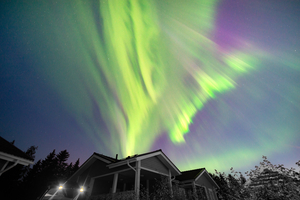 Amazing northern lights, these are a good way to start the season! It wasn't even really dark, and you could see this well...

I photographed the twilight rays from the balcony. 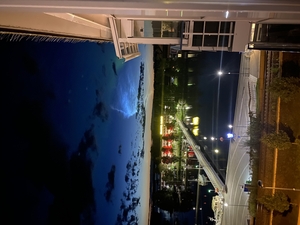 In Savonlinna, you could see small northern lights and these clouds, which I have never seen before in my life! An impressive sight. 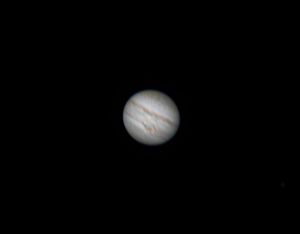 I tried out the deep sky camera for Jupiter last night: Well, these CMOS cameras are reasonably suitable for both. The weather was mediocre, but the Red Dot was still visible. The big boys have seen some changes in it lately, but in this weather you couldn't really see the details. The idea was to take a longer animation, but since the weather was like this, I could only take a few frames (here are the 2 best).

Landscape image of a planet 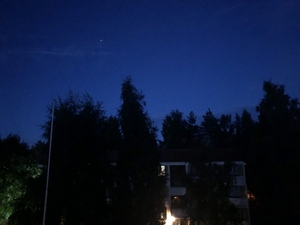 When I woke up in the early morning today, I saw a bright "star" in the brightening morning southern sky, which turned out to be Jupiter when viewed through my Newton-style reflecting telescope. I looked at that planet for a while through my telescope and I also saw through my telescope two so-called Galilean moon. Jupiter itself was bright and clear, but I could not make out the details of its cloud bands. I took a couple of pictures of the object with my iPhone 8 smartphone, which I believe also show illuminating night clouds, so does the observation actually belong to the cloud category? Th...

Auroras seen through breaks in the clouds 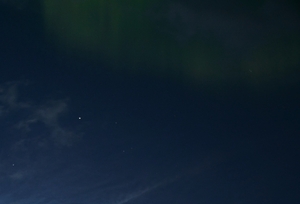 When I was looking at pictures of night clouds in the yard, I also saw some green gap in the clouds, I couldn't figure out what was in that first picture at first. I deleted one picture by accident, then hastily made something appear in that second picture. The rest alarm came a little behind the train, only at 1:33 a.m. when the sky was already covered. 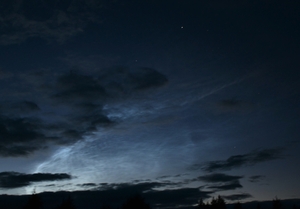 I woke up to it when the man came home after finishing the job of burning the tar pit, and with the aftermath, I noticed that I couldn't go back to sleep. Sometimes the clouds covered the sky almost completely, then they cleared again, until half past two it started to be completely cloudy and then there was quite a bit of rain. The last picture from the beginning, hastily taken with a mobile phone, and the second last of the first ones on the camera. 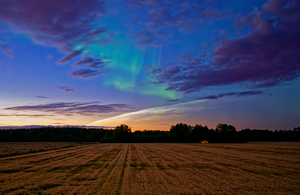 I really don't know if this sighting should be reported as aurora borealis, night clouds or even a rocket launch? Maybe all of these would do, but the northern lights were still the most important performer of the evening. Quite an explosive beginning of the northern lights season indeed. The dark blue moment was only enough for a couple of hours. As typically happens in photography, I missed the best moments before I could stretch myself out into the yard. Here are some bad raps from the night's special encounter. Of course, the clouds got in the way before I could photograph anything...

Skywarden is an observation system maintained by Ursa Astronomical Association. Available observation categories consist of different astronomical and atmospheric phenomena. You are welcome to participate even though you are not member of any Finnish astronomical associations. Easiest way to start browsing observation is by selecting observations with images and stories on the left side of the screen. Answers to your questions about the system can be found from FAQ -page.